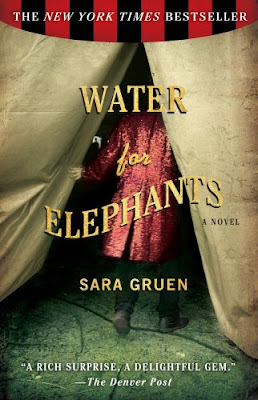 I actually had this book for almost a whole year before I read it. It was one of these books that I kept on hearing about and it was getting rave reviews. I remember I bought the book and a couple of days later I found out that it was being made into a movie. Other books were getting my attention so this book got pushed to the curb for a long time. Finally, the movie is made and I rush to read the book! I didn’t even watch the previews for the movie because I didn’t want it to ruin anything for me. On to the recap:

What do you do when you are about to graduate college, lose your parents to a car accident, suddenly penniless, and have no other family? Why, you jump on train that happens to be a traveling circus, of course.

The main character in Water for Elephants is Jacob Jankowski and it starts off with Jacob in a retirement home. The circus is in town and it brings up memories of events and relationships (good and bad) that were made while working on The Benzini Brothers Circus. In my opinion, Jacob forms the biggest/tightest relationships with three characters: Rosie, the elephant, Marlena, a star performer in the circus and Jacob’s love interest, and August, the lead animal trainer and Marlena’s husband. Yup, there is love and betrayal in this book, folks.

I wouldn’t consider this book a love story. It’s more about one man’s life with a traveling circus. Certain parts of the book were hard for me to read. Particularly the animal abuse. I know that this book is fiction but the abuse of the animals is reality. It made me wonder about how many animals were mistreated back in the 30’s. Even now.

I don’t feel like this book is a must read. Probably why it took me almost a year to start it. I thought it would be like The Help. That book stayed with me. Meaning, I think about it now and all my emotions I had while reading the book return. Water for Elephants didn’t have the same mojo. Honestly, If you aren’t a huge reader, I would skip the book and go straight for the movie. 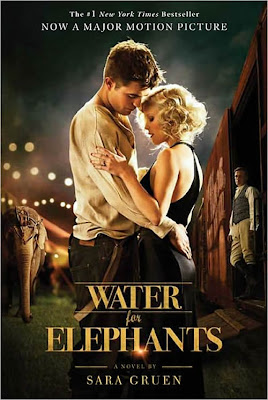 I knew there would be differences when I saw the movie. There is always differences. I allowed
Myself to watch one preview before I saw the movie and wish I didn’t. Just from the preview alone I know they were going to centralize the love story between Jacob and Marlena. As I mentioned in the book review, I don’t feel that was a major part of the book but I understand Hollywood has to go with what sells. Also, they left out a major character from the book. Well, he wasn’t MAJOR but I think he should have been in there. Of course when a book is going to be made into a movie, things have to ve rushed and changed. Such as the love sorry, the bind between Jacob and Rosie, and the cruel side to August. In the beginning of book you kind of like August. In the movie, you don’t like him from the get-go. I must say that Christoph Waltz played him perfectly. He was also “the bad guy” in Inglourious Basterds and played that role well. His characters, in both movies, aren’t overly aggressive or mean but when it comes out you’re left thinking “Holy Shit! What a jerk/evil guy!”

Visually, the movie was beautiful. Reese Witherspoon’s was gorgeous from head to toe. And her body was on point. Rob Patterson doesn’t really do it for me but he’s good eye candy. If you like that type.

Again, I had a hard time watching the abuse. I almost cried at the end in a major scene. I’m an emotional sap!

As I said, if books aren’t your thing, go see the movie. You’ll enjoy it.

One more thing: the previews SUCKED! I was hoping they showed one for The Help since it’s a movie based off a book and so is WFE. But I digress. The only good preview was for a movie called Anonymous. It’s based off Shakespeare and how he is a fraud. Looks good. Looks real good.

Want to Survive a World Filled with Zombies? Do Everything OPPOSITE of the Characters on The Walking Dead.