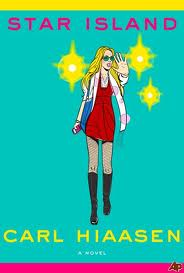 This book gives you a lil? bit of everything: sex, drugs, and alcohol (all from one character), blackmailing, scamming, kidnapping, murder, and a man named Skink. Who, by the way, became one of my favorite characters in the book.

While reading Star Island, I found myself saying WTF?! But, in a good way. There were so many twists and turns! Carl Hiaasen makes sure you stay interested until the very end. Once the book was finished, I found myself wanting more.

Let me start from the beginning as I am getting ahead of myself:

The central character of this book (And most likely won?t be the reader?s favorite. Well, I didn?t care for her.) is Cherry Pye. She is a ?singer? who likes the limelight but loves partying more. She is no stranger to having her stomach pumped due to her love of prescription pills. Cherry?s mother, Janet, naivet? is like one I have never seen/read. She ?believes? her daughter suffers from gastritis. Actually, I take that back. I think Becky Bloomwood from the Shopaholic Series is pretty na?ve.

Due to Cherry?s ?gastritis,? her management team decided that it would be best for Cherry to have a ?stunt double.? This part is played by Ann, who, surprise surprise, is an actress herself. As Cherry?s stunt double, it is Ann?s job to stand in for pictures and get shot by paparazzi while Cherry is secretly away at rehab working on her drug addiction, uh, I mean ?gastritis.?

Bang Abbott is your stereotypical sleazy paparazzo. He is willing to do anything to get the perfect shot. He started off as an honest (using that term very loosely) photographer and won a prestigious award but got lured into the game once he saw how much money he could make off one photo.

Abbott has ?sources? all throughout LA that tell him when someone famous is out and about. He receives this information for a fee, of course. Abbott knows that Cherry Pye is going to crash and burn pretty soon and he wants to be the one to get the ?money shot.?

After realizing that some of the photos he took of ?Cherry? were actually Ann, Abbott decides that he is going to take matters into his own hand. He decides he is going to kidnap Cherry and negotiate her return. He?s successful in the kidnapping. Too bad it?s Ann that he kidnaps.

I really don?t want to give away too much of the book but let?s talk a little about Skink. I found out that he is in another book by Hiaasen. As is Chemo, Cherry?s bodyguard that sports a weed whacker after a barracuda bit off his arm. Skink use to be the governor of Florida, when he was known as Clinton Tyree. Tired of the deceitful, money hungry, power hungry, environment destroying people of the world, Skink decides to take matters into his own hand. And does he ever! I am going to spare the details because they will make you squirm. Plus, I want you to read the book! He meets up with Ann who is forced to help him with his plan and they form quite an interesting bond.

Ok, that is all I?m giving you. This review is rather long but trust me, there is a whole lot more to the story! I definitely like the satirical writing style by Hiaasen and plan to check out his other books. Possibly the one(s) involving Skink and Chemo. One thing I did not like about his writing style is throughout the book he would refer to the characters by first and last name and then other times by their first name or would refer to them as ?the photographer? or ?the actress.? I kept thinking, ?I am halfway through the book! I know who the characters are!!? If you like books that are bit off-kilter then I suggest that you read Star Island.