Warning: I’m not judging or attacking, just giving my preference.

When I had my first son, I made the decision that I would not post pictures of him online. Personally, I don’t think its right or necessary to expose EVERY. SINGLE. milestone in a child’s life. And honestly, no one else (expect for close friends and family. And even they have their limits.) cares. Your child got his first haircut? Great! Happy for you! But I don’t need to see 17 pictures about it. Your child sitting on the potty is as cute as seeing an adult do it. (Confession: I did send a pic like this (of my son) to my parents but everything he does is cute to them).

I’m also paranoid to post pictures online because you just don’t know the crazies lurking in the world. I shudder when I see people posting naked pictures or their children in their underwear. Things get shared, “Liked, “Retweeted so frequent you just don’t know who is going to see it. I read a blog post about a woman whose daughter’s (who I believe is now deceased. She had a lot of complications/illnesses.) picture was found in a pedophile’s home in England. This mom lives in the Midwest in the US!!

I know I can’t protect my children from everything but I will control what I can. When my children are old enough and understand the consequences of what may happen when they expose too much then they can have at it.

Back to the point. We were at the library the other day (Which is a place a love. I need to dedicate a post to them. Which I will.) and I snapped a quick picture of my hair. Right now I have long big Senegalese Twists in and I was rocking a bun and I wanted to show it off. I had a dilemma: I’m a #babywearer and had my son in his Snugli. Not wanting to expose him I waited until he turned his head then snapped the pic: 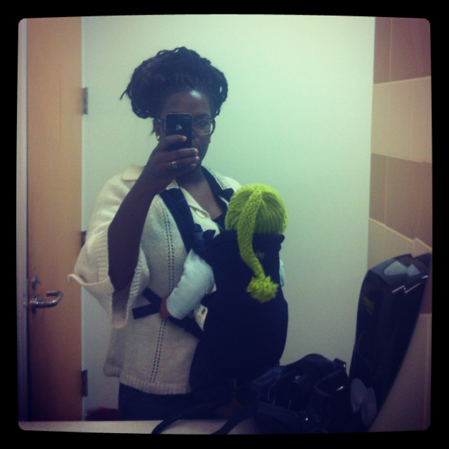 I posted this on Instagram with the caption: “Rocking the bun…and the baby.”

A day later I was speaking with Ebony and she told me I had pulled a “Beyonce.” Meaning: she will share pictures of her daughter but you won’t see her face. Shortly after our conversation ended, I visited Bey’s Tumblr and lo and behold, look what I saw:

Guess I did pull a Beyonce.

And just to clear up a few things, while I may not expose my children online, I am not overprotective (i.e. not pulling a “Michael Jackson”). We have gone to several events and festivals and my sons have had their picture taken. If the publication posts it on their site, I’m ok with that (because I gave permission) and will even let family and friends know. But when “friends” on Facebook ask (because let’s be honest, all of these people are not friends) I kindly let them know I don’t post pictures of them. If I like you, I may email you a picture.

What are your thoughts? Do you have a limit of what you will share?